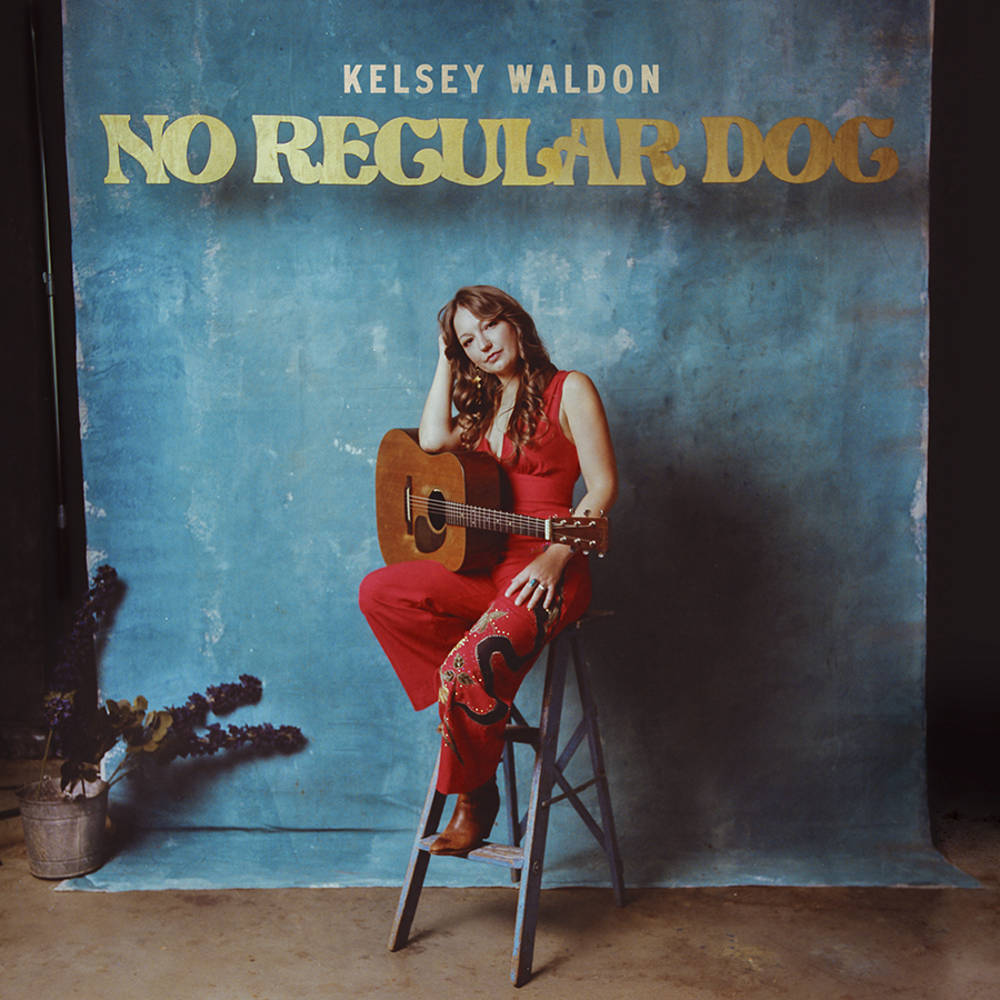 “I wrote ‘No Regular Dog’ at a time when I was gone so much and working so hard and starting to wonder if I had the staying power to keep it going,” says Waldon, who now lives in Ashland City, Tennessee. “After putting in my time in the van on the road, after all the blood, sweat, and tears and the crying in parking lots, I’d finally gotten to where I wanted—but it was also a moment when I really started questioning myself. In the end I came around to answer my own question and realize that, yes, I can do this. I won’t be put down so easy. I am no regular dog.”

Waldon’s fourth full-length and the follow-up to 2019’s White Noise/ White Lines—her debut release for John Prine’s Oh Boy Records—No Regular Dog came to life over the course of many charmed and freewheeling sessions at Dave’s Room Studio in Los Angeles, with production from kindred spirit Shooter Jennings (Brandi Carlile, Tanya Tucker). “I’d never recorded an album anywhere but Nashville or back home, and it felt good to get outside my bubble,” Waldon says. “We were able to hunker down and work till late into night, doing what we could to catch lightning in a bottle.”

In a departure from the more guitar-heavy approach of its predecessor (a critically lauded album that landed on NPR Music’s Best of 2019 list), No Regular Dog unfolds in a lush yet understated sound that lets the singular character of Waldon’s songwriting and voice shine through each track. Featuring her longtime band members, Brett Resnick (pedal steel), Alec Newnam (bass), and Nate Felty (drums), along with musicians like famed guitarist/dobro player Doug Pettibone (Lucinda Williams, Keith Richards), the album also illuminates the immense depth of her musicality, mining inspiration from such eclectic sources as mid-century bluegrass, ’60s soul, and ’70s country-rock. “Everything’s in there, all the music I’ve ever known and loved,” says Waldon. “I wanted to show my whole color scheme and create something that’s less of a honky-tonk thing and more like a big, beautiful picture of everything I see in country music.”

After opening on the luminous strings and pedal steel of its title track—in which Waldon self-identifies as a “prisoner of my mental cages, my own worst enemy”—No Regular Dog kicks into a much punchier mood on the brightly rambling “Sweet Little Girl.” “It’s about a girl who’s lost her way and now she’s trying to find it,” says Waldon. “I was inspired by real-life incidents, like all the thoughts that go through your head when you’re dealing with addiction and feeling like you’ve got this rage inside that you don’t know what to do with.” Graced with the lilting fiddle melodies of Jennings’s longtime collaborator Aubrey Richmond, the result is a prime showcase for Waldon’s fiercely honest storytelling (from the chorus: “I’ll be crawlin’ up the walls, just a like a little ol’ house fly/Anything so I can’t feel this hollow inside”). From there, No Regular Dog shifts into the candid introspection of “Tall and Mighty,” a bittersweet meditation on getting by in a world bent on breaking you down. “I’d been having conversations with my peers in this business, especially all my girlfriends who are such amazing songwriters in their own right, talking about this journey and all the smoke and mirrors of trying to live up to your dream,” says Waldon. “There have been times when I’ve tried to prove the wrong thing, but I’m through with that now. I’m not trying to be anybody but myself, and to write songs that show what’s in my heart and on my mind.”

A particularly poignant moment on No Regular Dog, “Season’s Ending” finds Waldon ruminating on the passing of John Prine, who died from Covid-related complications in April 2020. “That was the first song I wrote after John died—like so many people I was in complete shock, I couldn’t write for months,” says Waldon. “There’s been so much loss over the past few years; my partner’s uncle died from Covid the same day as John, and a lot of my friends have seen family members lose their struggles with addiction or depression. We’ve been carrying such a heavy load, so this song is about coping with that and trying to understand that death is a part of life.” One of several tracks featuring the heavenly background vocals of Kyshona Armstrong, Maureen Murphy, and Nickie Conley, “Season’s Ending” matches its soulful harmonies and lonesome guitar work with the kind of loving serenade that gently pierces the heart (e.g., “And ain’t it just like you to bloom and be gone”).

In a creative breakthrough for Waldon, No Regular Dog also features the first unabashedly joyful love song she’s ever written, the quietly powerful “Simple as Love.” “I was at home sitting on my back porch and I started thinking about how I’ve got all these heartbreak songs and drinking songs, but I’m not experiencing any of that anymore,” she says. “I’m at a point where I’m in a healthy relationship with someone who actually cares about me, and I wanted to write a song that expresses what love feels like in its purest form.” Laced with cascading guitar tones that glisten like sunlit honey, “Simple as Love” wholly achieves an ineffable sweetness while spotlighting Waldon’s idiosyncratic brand of poetry (“Like a junkie’s got its itch/It leaves you wantin’ more, wantin’ all of it/Just like a lily in a ditch/It grows where it wants to grow”).

Originally from the tiny rural town of Monkey’s Eyebrow, Waldon has long relied on music as a lifeline. “I’ve always used songwriting as a way to process the world around me and also process my own thoughts and feelings,” she says, naming classic country artists like Loretta Lynn, George Jones, and Merle Haggard among her early influences. “If I didn’t have the ability to put all that down on paper, I think I’d be pretty lost today.” After penning her first song as a small child—“My mom still has lyrics sheets I made when I was about nine, everything laid out in verse and chorus”—Waldon continued sharpening her craft and eventually left home for Nashville, where she further honed her chops by playing local bar gigs. Over the coming years, she put out a series of EPs before making her full-length debut with The Goldmine: a self-released 2014 effort that earned abundant praise from leading outlets like Rolling Stone, who hailed her as “Tammy Wynette on a trip to Whiskeytown.” Arriving in 2016, Waldon’s sophomore album I’ve Got a Way drew even more acclaim and appeared on such coveted year-end roundups as the Top 10 Favorite Albums Of 2016 list from Ken Tucker of NPR’s Fresh Air, with its lead single “All By Myself” featured on NPR’s Top 100 Songs of 2016 list. Several years later, she performed at the Grand Ole Opry with the likes of Sturgill Simpson and John Prine, who invited her to join the Oh Boy Records family while up onstage—making Waldon the label’s first new artist signing in 15 years. Co-produced with Dan Knobler (Allison Russell, Della Mae), White Noise/ White Lines delivered such standouts as “Kentucky, 1988,” which later topped Rolling Stone’s 25 Best Country and Americana Songs of 2019 list.

Looking back on the making of No Regular Dog—an album rooted in rigorous self-reflection—Waldon speaks to her newly clarified sense of purpose as a songwriter and artist. “I hope that these songs are able to live with people and help make the world a little better, because I think that’s a big part of what my job is,” she says. “At the end of the day, I’m so thankful for my passion for music because it’s sustained me throughout my whole life, and now I want it to do the same for other people. And if anyone’s struggling, I hope they can recognize the ‘No Regular Dog’ within themselves, and start to see how much they’re really worth.”